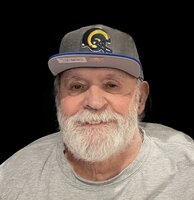 SAUQUOIT - Mr. Richard “Poppy” Turpin, age 79, passed away unexpectedly on Sunday, November 6, 2022 in the comfort of his home with the love of his family in his heart. Born in Utica, on March 31, 1943, Richard was the son of the late Leonard and Marie (Villiere) Turpin. He attended Utica Free Academy. A proud veteran, Richard served in the National Guard. He was formerly married to Jacqueline “Jackie” Gardner. An outdoorsman, Richard enjoyed camping, hunting, and fishing with his friends. Affectionately known as Poppy, he loved spending time with his grandchildren. They will have so many great, funny memories of their time spent with their Poppy. Richard is survived by his daughter, Lisa and Todd Martin; step-daughter, Denise Rakowski; grandchildren, Mark and Ashley Martin, Payton Martin and fiancé Tate Chambers, and Makenzie “Mickadoodle” Martin; sisters, Linda and Roger Bernhardt of Sauquoit, Shirley and Doug Kreimeyer of Texas, and Diane and Joseph Jackson of Texas; many nieces, nephews, great-nieces, great-nephews, cousins; and special friend, Joanne Gorea. He was predeceased by his step-son, Mark Rakowski. The family would like to thank the staff at the VA; Richard’s caregivers, Megan, Liz, Perez, and Fredricka; and the Sauquoit and Clayville Fire Department. The family celebrated Richard’s life in a private gathering. Arrangements have been entrusted to the Whiter-Hendrix Funeral Home, 100 Otsego St., Ilion.